Following the construction of Lower Baker Dam in 1925 and Upper Baker Dam in 1959, adult sockeye runs in Baker River remained relatively stable, averaging about 3,000 fish annually. But in the early 1980s, returns inexplicably plummeted, with just 99 fish returning in 1985. Many feared the river's sockeye population could die out altogether.

PSE, government resource agencies, local Native American tribes and other stakeholders responded collaboratively with an aggressive fish-recovery effort. The work included PSE's construction of a man-made "spawning beach" alongside Baker Lake to boost the number of salmon fry, as well as a series of modifications to a fish-attraction barge PSE had built in the late 1950s for helping juvenile salmon bypass both Baker River dams for downstream migration.

In 2008, PSE took another major step forward with the completion of an innovative Floating Surface Collector on Baker Lake. In its first few years of operation, the 1,000-ton apparatus produced dramatic results. The outmigration of Baker River juvenile salmon hit record levels in 2009 and again in 2010, when an all-time high of more than 520,000 fingerling salmon, mostly sockeye, were collected and transported downstream.

Fisheries biologists say they can't identify any other notable contributing factors or changes, beyond the new floating surface collector, that would point to such dramatic outmigration success in consecutive years. The record-setting outmigrations, they say, suggest that our fish-passage systems are working extremely well.

In 2009, the National Hydropower Association bestowed one of its Outstanding Stewards of America's Waters awards on PSE for our construction of the FSC. The National Marine Fisheries Service calls it a model for other high-reservoir dam operators. Representatives from dozens of domestic and foreign utilities have toured PSE's Baker River operation and several are either exploring or actively pursuing fish-migration methods based on our system.

The Floating Surface Collector attracts and safely holds juvenile salmon for downstream transport around our two hydroelectric dams on the Baker River. The one-of-a-kind, 130-foot-by-60-foot barge is equipped with a series of submerged screens, water pumps, fish-holding chambers, a fish-evaluation station, equipment-control rooms and a fish-loading facility. Fine-mesh guide nets extend from shore to shore and from the lake's surface to its bottom, forming an impassible netting funnel that leads small migrating fish to the collector facility.

A similar FSC was built and put into operation in 2013 on Lake Shannon, behind Lower Baker Dam. 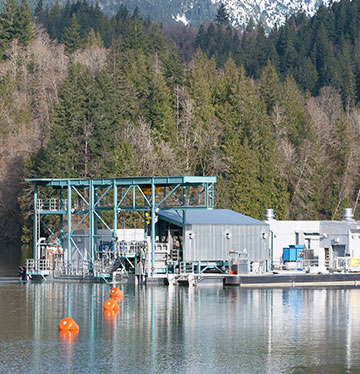