Puget Sound Energy's largest hydropower facility is the Baker River Hydroelectric Project, located on a tributary of the Skagit River in northwest Washington. The project includes two concrete dams and their associated powerhouses and facilities. The project reservoirs, Baker Lake and Lake Shannon, are fed by runoff from the flanks of Mount Baker and Mount Shuksan.

Starting upstream on the Baker River system is the Upper Baker Dam, a 312-foot-high concrete gravity dam completed in 1959 with 107 megawatts of power-generating capacity. Downstream is the 285-foot-high Lower Baker Dam, a concrete arch dam completed in 1925, which has a generating capacity of 111 megawatts. The power project also contains extensive salmon-enhancement systems, including a fish hatchery and innovative facilities for moving migrating fish both upstream and downstream around PSE's two dams.

The project creates more than 7,203 acres of water surface that provides public recreation, fisheries, flood risk management and hydropower benefits for the communities in the Skagit River Valley and the greater northwest. To ensure public safety in the operation of its facilities, PSE complies with strict federal regulations, and has developed a comprehensive Dam Safety Program. PSE was awarded a 50-year federal operating license for the project in October 2008.

As part of PSE's Dam Safety Program and Emergency Action Plan, PSE upgraded the early-warning siren system for the project in 2018. The upgrade increased the sound coverage area, taking the system from three sirens to eight. Additional information is provided in PSE's pamphlet on public safety around dams.

The sirens are tested once a month. During the siren test, the sirens sound for less than one minute. The siren test occurs on the second Monday of every month at 6 p.m. To hear the siren messages and tone, download the audio files below:

Explore the interactive map below to see the locations of the sirens. 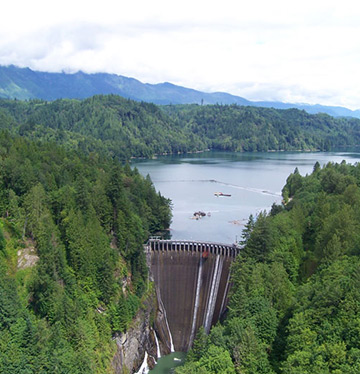